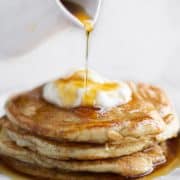 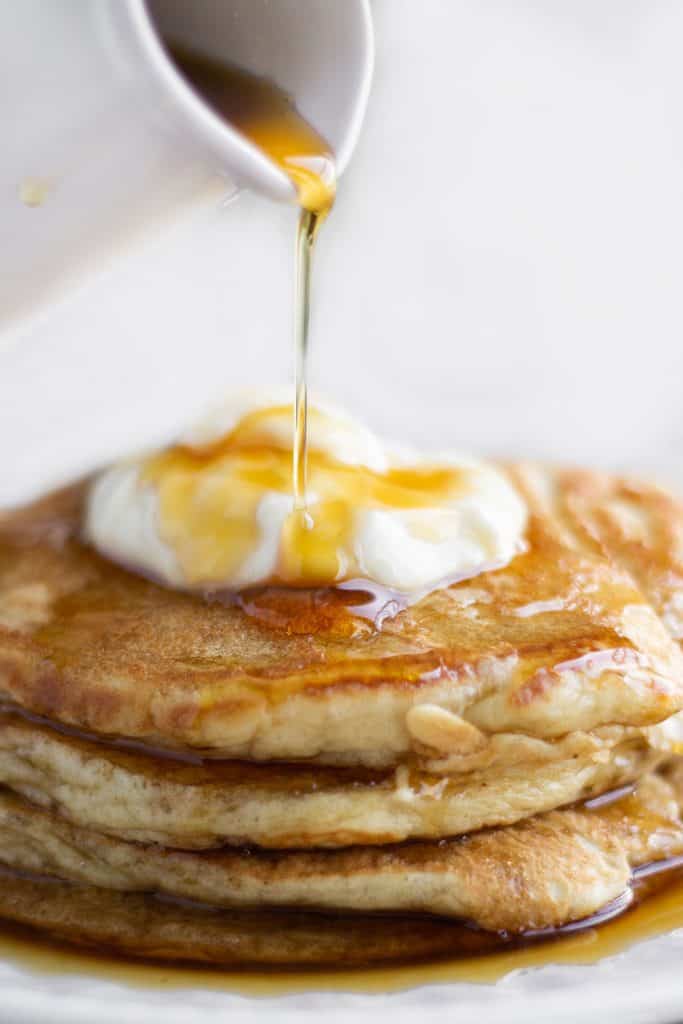 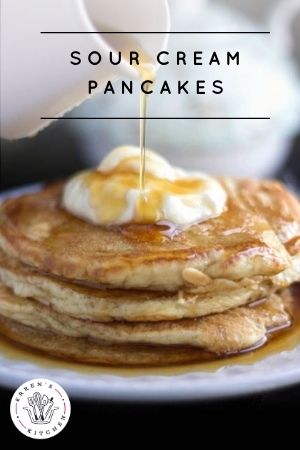 I’ve made a lot of pancakes in my time, but I have to say this is my favorite recipe. They cook up golden brown on the outside, and wonderfully fluffy in the middle.

These simple and fluffy pancakes are delicious and super simple to make requiring very little effort. Once you try them, you’ll never go back to a mix again.

The Trick to Making Fluffy Pancakes

Don’t over mix the batter. Over mixing will make dense, heavy pancakes. Start with mixing the wet and dry ingredients separately. To combine them stir just until the flour is moistened. Lumps are totally fine!

What Sour Cream Is Best

When cooking or baking with sour cream, it’s vital to use full-fat sour cream as opposed to fat-free or low fat. When heated, low-fat sour cream liquefies and essentially turns to water changing the recipe completely.

When To Flip Pancakes

Flip when the edges look dry and the surface bubbles have popped, forming holes that don’t fill up with batter.

How To Make Sour Cream Pancakes

Mix well to combine and then add the wet ingredients into the flour mixture.

Stir to combine. Then allow to rest for 5-10 minutes.

Stir just until the flour is moistened to avoid over mixing. A few lumps are totally fine!

Coat a large skillet with melted butter and heat over medium heat until hot.

Make a small test pancake to check the pan temperature.  If your pancake is overcooked on the outside and raw on the inside, adjust the heat.

Working in batches, pour the batter into the skillet.

To make your pancakes consistent in size, use an ice cream scoop or quarter-cup measuring cup to add the batter to the pan.

Cook until holes appear on the surface of the pancake.

Flip and cook the other side for about a minute or until golden.

How do you make pancakes ahead?

Combine the dry and wet ingredients separately (excluding the melted butter). Store the wet ingredients overnight. Then in the morning, melt the butter and combine everything together in one bowl.

How do you freeze pancakes?

Freeze in a freezer separated by parchment paper for up to 3 months.

Update Notes: This recipe was originally published in 2015, but was re-posted to include new photos and tips in 2020.

END_OF_DOCUMENT_TOKEN_TO_BE_REPLACED

Grab a cup of coffee and visit while Erren shares stories from life outside the kitchen.
10.9Kshares