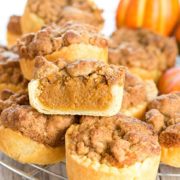 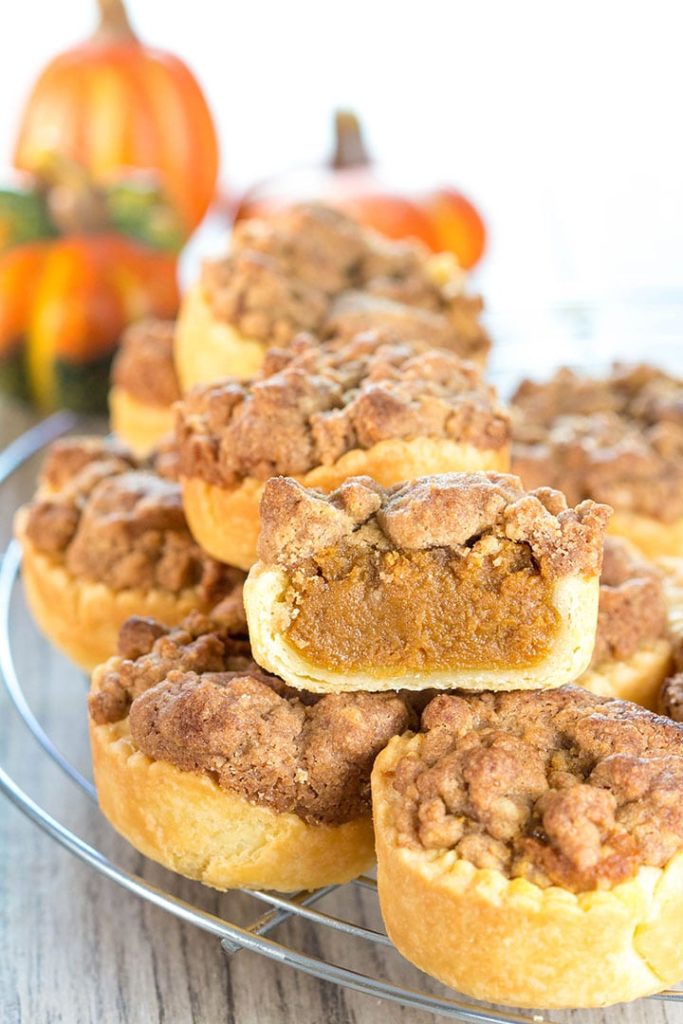 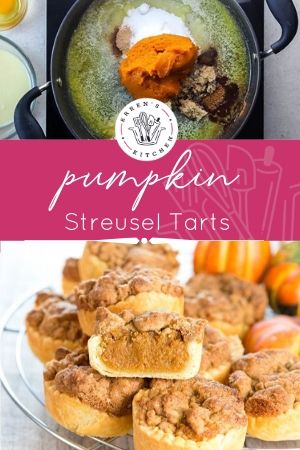 Pumpkin Spice is a Fall favorite, from Lattes to Pumpkin Spice Sticky Buns, to these delicious tarts, indulge yourself in the season’s best flavors.

Pumpkin Spice At Its Finest

From late summer until Thanksgiving, pumpkin spice takes over our stores. I kid you not – I saw pumpkin spice body wash the other day!

Listen, I’m crazy about pumpkin spice just as much as the next girl, but am I the only one who thinks body wash is one step too far? I don’t know about you, but I don’t want to get out of the shower smelling like a pumpkin pie.

That said, I’m kicking off this year’s pumpkin craze with these amazing Pumpkin Streusel Tarts. Last year, I posted my Pumpkin Pie Sticky Buns and they have been so popular, I wasn’t sure how to compete, but these tarts are fabulous!

Watch How to Make Pumpkin Tarts

Is canned pumpkin the same as pumpkin purée?

Canned pumpkin is simply cooked and sometimes spiced and sweetened before canning. While pumpkin puree is usually fresh pumpkin that’s cooked and pureed.

I have made this recipe using both canned and fresh pumpkin and with all of the spice, the pumpkin flavor came through wonderfully with both.

One thing to keep in mind with canned Pumpkin is that it often comes sweetened so look at the ingredients on the label and taste.  If it seems quite sweet, you may want to adjust the recipe accordingly.

If you want to use fresh pumpkin, make sure you know what you’re doing as it can be quite watery if not done well.  See this article from Breads from Anna for some great advice on making your own.

These tarts are really simple to make.  If you buy a ready-made crust, it would take no time at all, but I promise the homemade crust is worth the added effort!

For more details on making homemade pie crust, see my post on how to make pie crust.

How To Make Pumpkin Tarts

Start with rolling the dough to a ¼ inch thick. Using a cookie cutter slightly larger than your cupcake sections in a cupcake pan, cut the dough.

Place the circles into the sections of the pan, chill for 20 minutes and dock with a fork.

Add the condensed milk and egg and mix until smooth.

Heat and whisk until the mixture starts to bubble.  Turn the heat all the way down and continue mixing until it thickens to a spreadable consistency. Remove from heat and set aside.

To make the topping, start with adding both sugars, cinnamon, and salt into a medium mixing bowl. Mix together until combined. Add melted butter.

Stir to blend and set aside.

Spoon the filling into the tart shells.

Cover with the crumb topping and bake.

Try substituting the pumpkin for candied yams, butternut squash, or sweet potato for an all-new tart.

How do you store pumpkin tarts?

Store in an airtight container in the refrigerator for up to three days.

Can you freeze pumpkin tarts?

Pumpkin tarts can be frozen, although some integrity and texture may be affected.  The filling may separate slightly and the crust might get soggy.

To freeze, wrap tightly in plastic wrap and foil or place in a freezer bag. These tarts can be frozen for up to two months. Thaw in the refrigerator.

What can I substitute for pumpkin spice?

To prepare the filling:

To prepare the topping:

Update Notes: This post was originally published on Nov 11, 2017, but was republished with new photos, step by step instructions, cooking tips, and a video in October of 2020.

END_OF_DOCUMENT_TOKEN_TO_BE_REPLACED

Grab a cup of coffee and visit while Erren shares stories from life outside the kitchen.
25.4K shares